The secret of change is to focus all your energy, not on fighting the old, but building the new. When Aniket Pol of Allied Engineering decided to focus his energies on new opportunities in mould manufacturing, Sparkonix emerged as a strong technology partner to bring his vision into reality. Allied Industries relied on Sparkonix’s proven EDM technology to invest in India’s first indigenously developed Tyre Mould EDMs.

The market for tyre moulds is rapidly expanding and mostly dominated by suppliers from China. However, with shorter turnaround times tyre manufacturers in India are now preferring to source moulds, locally. With availability of right technology, in-depth expertise and world-class service from Sparkonix, Indian mould manufacturers are now well poised to address the growing demand for tyre moulds, in domestic and international markets.

The development of Tyre Mould EDMs is a reflection of Sparkonix’s partnering spirit with its customers. 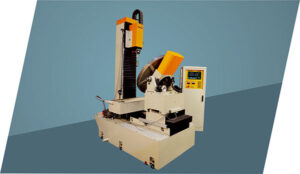 EDMs for precision and large scale manufacturing in Aerospace